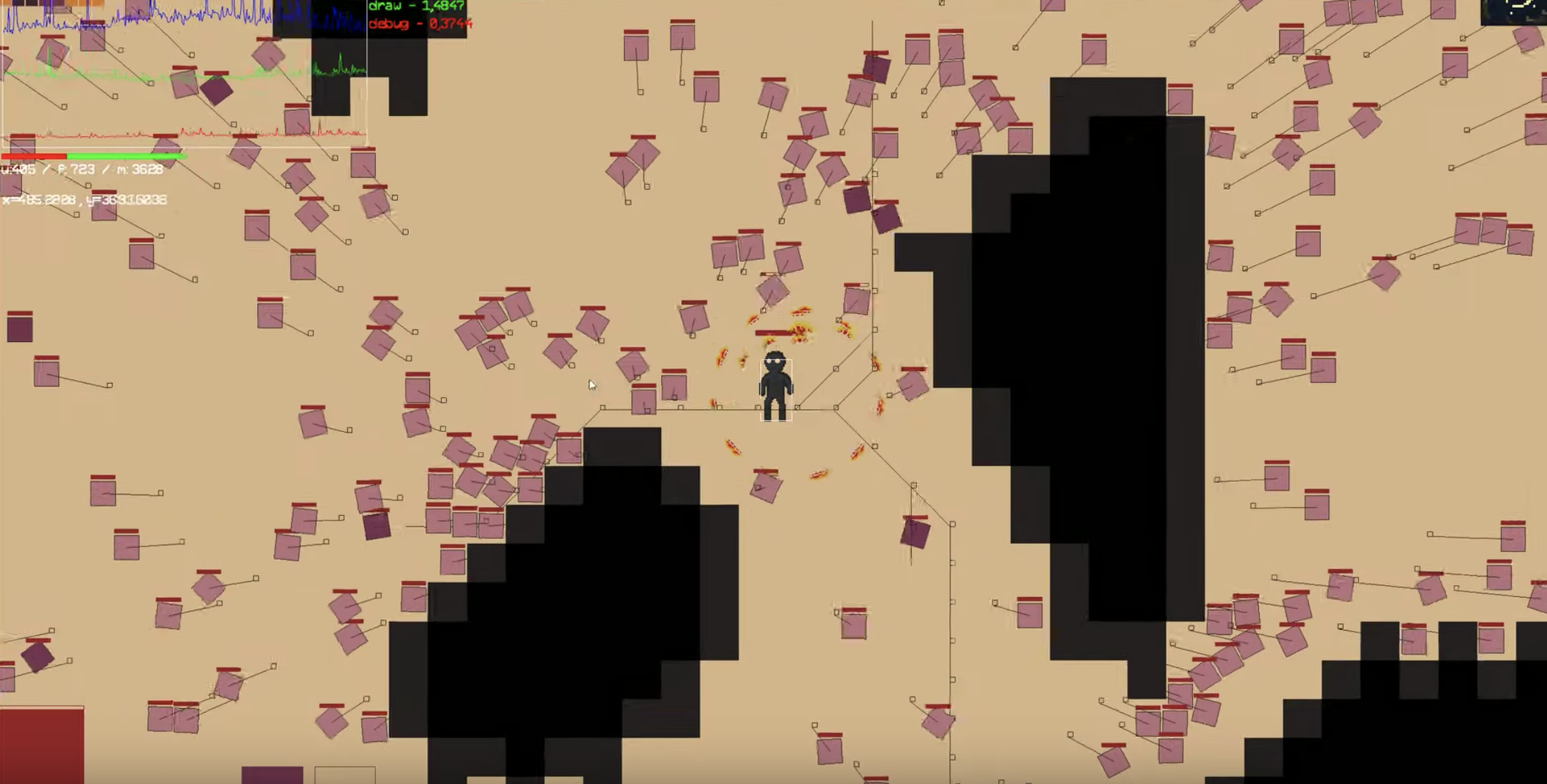 Who doesn’t love flashy fun things! LibGDX is a framework that makes it easy and fun to work with graphics in Java. LibGDX makes it possible to use the same code base for multiple platforms such as mobile, html and desktop. It comes with OpenGL bindings, a high level graphics API, audio, input handling and much more.

Using LibGDX with Kotlin can feel a little bit dated and clunky, it's a Java framework that's been around for quite some time, and not a framework tailored for Kotlin. To make LibGDX feel more idiomatic to Kotlin we have the perfect library for that; ktx is a library aimed to make LibGDX feel like native Kotlin framework.

We are going to use LibGDX and LibKTX, so lets add those to our dependency list. The build.gradle file should look something like this:

From LibGDX we need the core gdx package, the lwjgl for opengl bindings and platform for our desired platform, which is desktop (native) in our case. We also want to include ktx-app and ktx-graphic for idiomatic Kotlin syntax supplied by the LibKTX library.

Let there be darkness

Lets create the simplest application we can. A black screen!

There is not much to the example above. We've created a Kotlin file named `MyGame.kt` and have put some code in to it. We use LwjglApplicationConfiguration to configure our games resolution. It has a lot of options to play around with, like capping FPS and other performance tweaks, but for now we'll keep it simple. The second thing we do is to create a LwjglApplication and pass our game adapter and config to that.

The last thing we need to do is to create a game adapter that will contain our game. To make one we simply extend the KtxApplicationAdapter and override the methods we want to use. For our black screen application doing nothing is enough. And that's it. We can now start our application by running the main method.

Let there be light

The application adapter comes with two important methods we can override: create and render. The create method is run before the application starts and this is where we do all our LibGDX related setup. The render method acts as the main game loop. We know we need to handle user input, have some game play and we need to draw the game. So lets make functions for those and put them in the render method.

With our game application structure outlined lets add some game objects and what's more fitting than Santa and gifts.

We use Kotlin data classes to represent Santa and ChristmasGifts. For the gifts we give them a random horizontal position and put them at the top of the game screen. The create method is run after LibGDX is loaded and ensures that we can safely access LibGDX-specific stuff inside it. We don't need that for our data objects so we just place them as private variables and ignore create for now.

The next part is to make our game interactive. Luckily input-handling with LibGDX is easy.

LibGDX has already mapped all keybindings to reasonable names for us and Gdx.input contains methods for checking input state. In this Christmas themed game we just want to check if a keyboard button is pressed and move Santa based on that.

Every game needs some good core game play. This game won't have much of that, but lets add some randomness and "gravity"!

That's the game. We add a new gift every now and then and then move all the gifts down one pixel on the screen. I gotta admit that this is maybe not the most exciting game to date, but hey, it at least does something.

With input, game play and data objects out of the way let us draw our amazing game!

There are two main ways of drawing stuff with LibGDX: Sprites and Shapes. We'll be drawing shapes (rectangles) and that require us to set up a LibGDX renderer. Since the renderer is a LibGDX component we need to load it in the create step of our game adapter. With that out of the way lets draw some stuff!

First things first though. We need to clear the screen (cleanScreen) so we don't get multiple frames drawn at the same time. If we forget to clear the screen we'll just draw stuff on top of other things and it will become a huge mess, you can remove cleanScreen to see how messy it can get, but I will for sure clear the screen. To draw shapes in our game we use ShapeRenderer from LibGDX combined with the use extension function from LibKTX.

LibKTX has countless of extension functions and this is where some of the magic comes from. Using only LibGDX we would have to use start a drawing by renderer.begin(), do some drawing, and finishing it up by calling renderer.end(). LibKTX simplify this and it comes with a huge range of improvements over LibGDX when using Kotlin. Check out the official site for more examples.

With our renderer set up we can now draw stuff on to the screen, renderer.color sets the color and renderer.rect draws a rectangle.

Putting it all together

The game might be simple, and we can almost argue that it's not a game at all, it has no real game play and no end goal, but it does highlights some of the features of LibGDX and LibKTX. And with enough imagination you can almost see Santa running around trying to pick up the green gifts, saving Christmas.

If you want to see how to structure a proper LibKTX project that includes assets, sounds and multiple platforms you should take a look at SimpleKtxGame. I can also highly recommend Beat the High-Score, a talk from last years KotlinConf by David Wursteisen.

You can make pretty cool stuff using Kotlin, LibGDX and LibKTX. As a side project over the last year I've been making a game and I can wholeheartedly recommend you to do the same. Check out the video below to see an example of what you can make using Kotlin! Peace out and happy holidays.