The ins and outs of Kotlin

Wonder why a MutableList<Cat> isn't a subtype of MutableList<Animal>? Ever seen the "in" and "out" modifiers in Kotlin and wondered what they do? Let's find out!

So the other day I was writing a program for my new zoo. What? Okay fine I haven't actually opened a zoo, I was writing some very boring domain-specific software at work. But it's Christmas, let's just pretend.

There I was modelling my new zoo in Kotlin. I had decided on a simple inheritance; all animals of the zoo would inherit from the superclass "Animal", and would be contained in a list of animals. Currently all I had for my zoo were my two cats; Sir Toby and Mr Winterbottom. It looked something like this:

All was good and i kept on adding new features to my zoo. Until at one point I realized something quite obvious: I need to be able to expand my zoo! Well that's a simple refactoring, I just take that immutable List of Animals and turn it into a MutableList of...

Wait, what? What do you mean my cats arent animals? And why don't I get the error when I have a normal immutable List? Confused? Try it yourself:

Now some of the more experienced of you might already be mumbling about "covariance, contravariance, decleration-site versus use-site variance, ArrayStoreException" and other technical mumbo jumbo. But for those of you who - like me - are stumped by why the mutability of my list seemingly defines whether Mr Winterbottom is an animal or not (he most assuredly is!): I'll try to explain.

Like any good developer I undid and redid my change from List to MutableList about seven times before admitting it wasn't IntelliJ trying to mess with me. I then proceeded to take a look at the signature of the two interfaces:

Pretty much what I expected except one little thing: before the generic "E" of List, there was the keyword "out". This was missing in MutableList. Huh.

Now before we go any further, let's do a very quick recap of inheritance and generics. In Kotlin as with many programming languages we are allowed to assign a subclass to a variable with the type of one of its superclasses:

Now, of course we cannot handle this variable as if it was a cat since we've only declared it as an Animal:

This is one of the central mechanics in object oriented programming.

Now with generics, things get a little trickier. Let's take our zoo. Eventually I need somewhere for my animals to stay, so I'll make an Enclossure class. (Cage sounds so...cramped). And I'll make it generic on any subtype of animal:

And give Mr Winterbottom a new home.

So this is all well and good. We've made a generic class that can be used with any animal that inherits from the Animal-class, like a dog or a sloth. It even has the feed()-function that acts equally on all animals. However, say I now wanted to add the feature of feeding any animal inside an Enclosure:

Now intuitively, this might look good. However, this doesn't actually compile:

You see, in Kotlin, generic types are by default invariant. This means that Enclosure<Cat> is not a subtype of Enclosure<Animal>, and cannot be assigned to it. We say that Enclosure<T> is invariant in T. "But wait!", you might be saying... "Didn't you assign a List<Cat> to a List<Animal> earlier?" I did indeed, and herein lies the magic. If we take one more look at the documentation for List and MutableList, right underneath the signature, by the parameter descriptions it says:

interface List<out E> : Collection<E>
E - the type of elements contained in the list. The list is covariant on its element type.

interface MutableList<E> : List<E>, MutableCollection<E>
E - the type of elements contained in the list. The mutable list is invariant on its element type.

I assign my MutableList<Cat> to a variable of type MutableList<Animal>. All is fine and dandy. Until the "new guy" (a dog person...) tries to make this function:

There is nothing wrong with it, a list of animals should definitely be able to hold a Dog, which also inherits from Animal. However, what if I now run the function with my mutable list of cats? (Which we are pretending are a subclass of MutableList<Animal>)

Take a moment before you read on to ask yourself why the Kotlin people would not allow this. Why isn't the class MutableList covariant? What error will this cause? Don't worry, take your time. This whole generic business is a bit to wrap our head around.

Ready for the answer? All right. The error we'd encounter is that we are now adding a Dog to a variable defined only to hold Cats. The variable myCats originally wasn't a MutableList<Animal> but a MutableList<Cat>, one which now suddenly contains a Dog! In Java, we can encounter this error with Arrays since Arrays are covariant on its type. It's called an ArrayStoreException, and is a runtime error. Meaning nothing warns us that it will happen. However in Kotlin, they've tried to make this type of error difficult by making all generics by default invariant. So why then is an immutable List covariant? Well first of all, if we had a List<Animal> as a parameter to our addADog(), we wouldn't be able to add a dog. Since.. well the List interface doesn't have add(). So what that means, is that you can't mess with the content of List. Meaning it's safe to assign a List<Cat> to List<Animal>, because none can make the mistake of adding a Dog or a Sloth.

Can we generalize this rule to any kind of generic class? Well, kind of. The rule as far as I've understood it is this:

Only a class whose members strictly return the type on which it is generic can be covariant on said type. Meaning no functions of the class can take/consume a parameter of the type, they can only return it. This in turn means there is no way for such a class to have a function that can take a "wrong" subclass and add it to its member variables. We call classes that only return their type producers. Producers are covariant on their type. List<E> is a producer, and is therefore covariant on E. However MutableList has the function add(element: E), this means the class doesn't strictly return, it also consumes a parameter of the type and thus is not a producer, nor is it covariant on the type.

Now before some of you get all up in arms about the List-interface having functions such as contains(element: E), which quite clearly consumes a parameter of the type, and therefore should make List not strictly a producer. Let's take a look at the List implementation:

Notice the @UnsafeVariance annotation? Yep. I just gave you a strict rule to follow, and one minute later I show you a exception to it. As long as you annotate the functions of your producer that do consume its type with @UnsafeVariance, Kotlin won't complain. This means Kotlin forces you to make a conscious decision to break this rule, if you so wish. At least it tried.

So how do we annotate a type in such a way that our generic class will be covariant on it? Some of you might already have guessed it: the out modifier. Doing so not only makes our class covariant on this type, it also stops us from making any function that take this type in as a parameter, and only allows us to return it. In other words: the type can only go out of our class. Hence the name! This is also why MutableList does not have out on it's type, since it has functions that consume it without the annotation.

Phew! Still hanging on? All right we have one more thing. Remember that Enclosure-class?

Now, this clearly clearly breaks with our rule: it has the function moveInAnimal(animal: T) that consumes the type and is therefore not strictly a producer, and cannot have the out-modifier on T. However it does not have any members that return the class, meaning it is strictly a consumer. Perhaps there is a similar rule for that?

Let's say for a moment I want to add this function:

And it works splendidly!

But what if I have an Enclosure<Cat>? 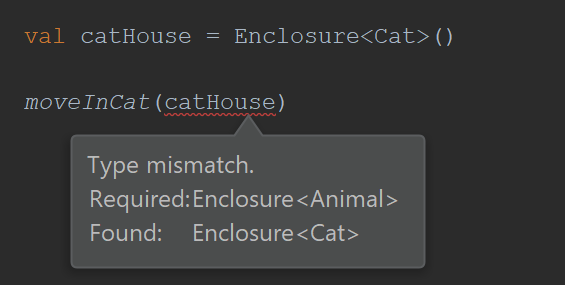 And it would accept both Enclosure<Animal> and Enclosure<Cat> as parameters if Enclosure is contravariant on its type. Now before I give you the secret, let us look at what problems might arise from allowing contravariance. Imagine for a moment that the "new guy" added a function to get the inhabitant out of an Enclosure:

So that he could play with the kitten before moving the new inhabitant in:

Now if Enclosure is contravariant, this means that one could call this function with an Enclosure<Animal>-parameter:

This looks fine. Until we do something like this:

What happens inside our moveInCat() function now? As long as Enclosure is contravariant, getInhabitant() might return a Dog. And dogs don't purr! You'd get a class cast exception.

This is a very similar problem to our covariance problem. So the Kotlin people made another rule: If you want contravariance your class must be strictly a consumer. This means that there is no way for the class to return the underlying type, only take it in as a parameter. In our case, it would make the function getInhabitant():T create a compile error. So let's remove that function and add the - you guessed it - in modifier to T:

Our Enclosure class is now strictly a consumer. And with the addition of the in modifier it is now also contravariant on T. This means we can now do:

A generic class is covariant on its type if classes containing subtypes of its type are also subclasses.

A generic class is contravariant on its type if classes containing supertypes of its type are also subclasses.

To make a class covariant you need to add the out modifier to its type, and ensure that no functions consume the type.

To make a class contravariant you need to add the in modifier to its type, and ensure that no function returns the type.